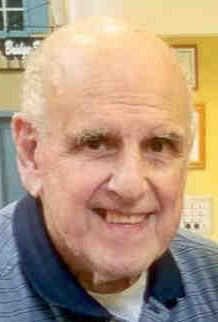 Born in Trenton, he was a lifelong area resident.  Lou attended Trenton Public School System, graduating from Trenton Central High School in 1942.  During his school years, Lou played the Alto saxophone in Junior and Senior High School Bands and in the American Legion Band until entering the US Navy in May 1943. Lou’s expertise in music were through the efforts of his uncle, Jimmy Vincent, who taught him how to play.

During World War II, Lou was schooled as a Torpedo man before his advanced training with the US Navy. Later he served aboard the Aircraft Carrier, U.S.S. Kalinin Bay CVE 68 in the Pacific Theatre.

In 2002, Lou retired from the US Postal System with forty years of service; 23 of those years as Postmaster of Ringoes. In 1967 to 1975, he left the postal system and went to work for Base Ten Systems in Hamilton until its closing and he returned to the postal system.

Lou was a member and officer of various Civic, Professional, and Fraternal Organizations wherein he received many Awards and Honors for his efforts. He was a member and past Treasurer of the Italian-American National Hall of Fame, a member and past Treasurer of Mercer County Holy Name Bowling League, a member of the Knights of Columbus, Trenton Council No. 355 and held the position of Past Grand Knight and District Deputy. Lou was also a member and usher at Holy Angles Catholic Church, belonging to its Holy Name Society, a member and past President of the Postal Workers Union, a member of Local Clerks Negotiating Team, and Editor of the Local Clerks Union Newspaper. In Lou’s spare time, he enjoyed bowling and traveling worldwide with his wife and special friends, Ray and Helen Barnard.

We would like to thank the staff and aides of Brookdale Hamilton, as well as Greenwood House Hospice, for the caring of Lou.

To send flowers to the family or plant a tree in memory of Louis Stanziale, please visit Tribute Store
Print
Thursday
5
April