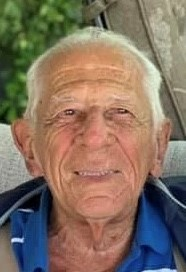 Please share a memory of Victor to include in a keepsake book for family and friends.
View Tribute Book
Victor (Vic) F. Russo, a “Poppop” to everyone, passed peacefully at home surrounded by his family on Thursday, June 10th at the age of 90. Vic was born December 1, 1930 in Trenton, NJ where he resided for 64 years. Vic is preceded in passing by his beloved wife of 64 years, Louise Russo. Vic was predeceased by his parents Michael and Mildred Russo. He is survived by his daughter Michele Headrick and husband Jeffrey, his son Michael Russo and wife Joyce, his son Mark Russo and Patty McGarrity. He is also survived by brother Joseph “Duke” Russo and wife Dorothy. He also leaves behind grandchildren Megan Heinrich and husband John, Rob Riehl and wife Sarah, Jason Russo, Rebecca Ahlemeyer and husband Larry, Erin Russo, Molly Russo, Hailey Headrick, Kerry Headrick, and great-grandchildren Madison, Violet, Anthony, and Aaron. He also leaves behind nephew Joseph Russo and wife Mary Rose, niece Barbara Russo, and great-niece Nikki Russo. Vic is a veteran of the Korean War where he served in the United States Army as a member of the 54th Engineer Field Maintenance Company. For his service, he earned a Korean Service Medal with 3 Bronze Service Stars, a United Nations Service Medal and a National Defense Service Medal. He served honorably, graduating first in his class in the Army Engineering and Diesel Engine School and achieving the rank of Corporal. Prior to proudly serving his country, Vic graduated from Trenton Central High School. He later attended New York University, majoring in Psychology. Vic, a true “Jack of all trades”, worked as a clerk at Chase AirCraft, spent seven years as a mechanic at NJ Dept of Transportation, and went on to co-own The 6’s Restaurant and Bar. He later served as Director of the Boys Club of Trenton. Later, Vic enjoyed a very successful 45-year career as a salesman at Griffith Electric, Franklin Electric, American Electric and various other electrical supply houses. He also was a highly respected member of the Central Jersey Electric League. In addition to his many professional accomplishments, Vic was an avid golfer, bowler, and a die-hard Yankees fan. He loved Frank Sinatra and authentic Italian food on par with his Chambersburg upbringing. He was a highly regarded little league baseball coach and co-founder of Chambersburg Senior Little League. His biggest and most important role and accomplishment came from being a proud Poppop to his grandchildren and great-grandchildren and a mentor and role model to his friends and peers. Vic was a thinker and a tinker. If you had a problem, Vic was your go-to man. If for some reason he couldn’t figure it out, he wouldn’t stop until he found someone that could. Vic was the kind of man every man hoped to be. He was a man that always had the love and respect of his friends, family, co-workers and peers. Vic was the most admirable of men. While he upheld the traditional values of service and family, he was still able to navigate and engage in the modern world, even as he advanced in years. His sense of tradition, paired with great aptitude and love for his family and community, will forever make Poppop stand out among men of any generation. Calling hours will be held from Wednesday, June 16 from 9:30am to 12:30pm followed by funeral service at 12:30pm at D'Errico Funeral Chapel, 30 Yardville-Allentown Road, Yardville, NJ, located in the Buklad-Merlino Facility. Burial will follow in the Our Lady of Lourdes Cemetery, 400 Woolsey Street, Hamilton, NJ.
To send flowers to the family or plant a tree in memory of Victor Russo, please visit Tribute Store
Wednesday
16
June

Look inside to read what others have shared
Family and friends are coming together online to create a special keepsake. Every memory left on the online obituary will be automatically included in this book.
View Tribute Book
Share Your Memory of
Victor
Upload Your Memory View All Memories
Be the first to upload a memory!
Share A Memory
Send Flowers
Plant a Tree